Conversation with Laura Keegan: A Humanitarian Here at Home and Abroad

Conversation with Laura Keegan: A Humanitarian Here at Home and Abroad
HIVEdmonton's Laura Keegan feels uncomfortable being referred to as a 'hero.' But 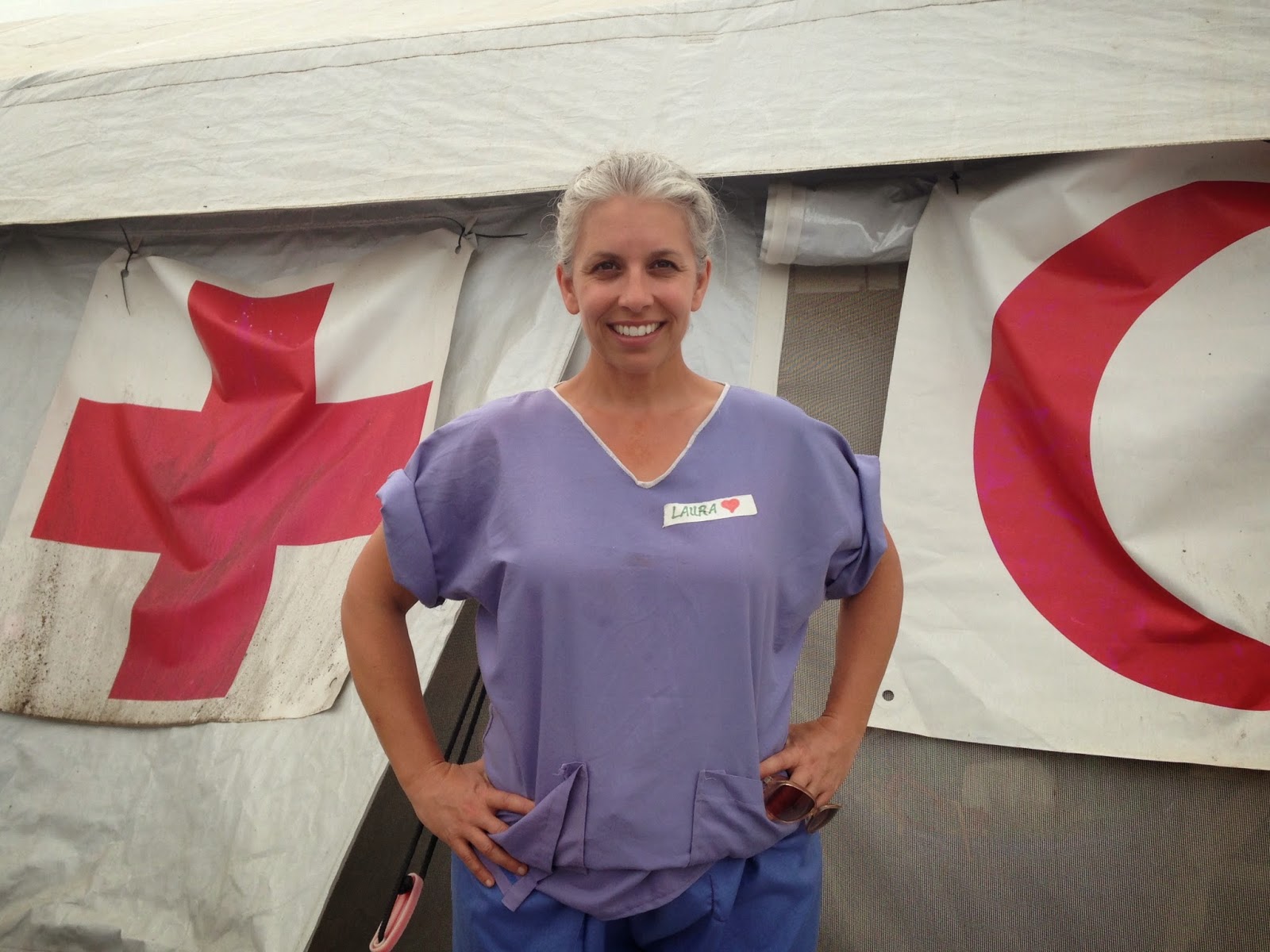 to many, her unwavering dedication and commitment to humanitarian work here at home and abroad are nothing short of heroic. In her role as the current Director of Resource Development & Public Engagement at HIV Edmonton, Laura raises awareness around the important issues touching the lives of Canadians living with HIV/AIDS.


Most recently, Laura's tremendous passion for helping people took her all the way to Sierra Leone, Africa, where she tackled the Ebola epidemic head-on. As a psychosocial delegate of the Canadian Red Cross Emergency Response Unit, Laura provided psychological and emotional support to individuals and families affected by Ebola.

The Canadian AIDS Society had the special privilege of hearing Laura's personal account of her experience in Sierra Leone. We invite you to listen in on our fascinating conversation with Laura ...

CAS: You were recently deployed as part of the Canadian Red Cross Emergency Response Unit to Sierra Leone to assist with the Ebola epidemic. Can you tell us a bit about what that experience was like for you, and what types of responsibilities were you assigned during the crisis?
Laura: My role with the Emergency Response Unit was what's called a psychosocial delegate. So the psychosocial component is of course responsible for the mental health and psychological well-being. There were 3 different categories in the Ebola Treatment Centre where I volunteered – “Confirmed”, “Probable Area” and a “Suspect Area”. Those who were “suspected” had symptoms, but they couldn't name anyone they knew with Ebola. The “probable area” was that they had symptoms, and they could also name someone they knew with Ebola. I worked with patients in all three categories. Both with confirmed infections, as well as those who were struggling with waiting for their confirmation, which was also very, very challenging for them emotionally. We were also responsible for the other side, which is the happier side - discharging.

When I speak about the experience – I think of how it felt like a roller coaster. The highs were really high, and the lows were really low, and they happened almost simultaneously every day. When we had our last patient, and were down to just this one patient at the Ebola Treatment Centre, and she was about to be discharged, we were all so excited, and people were singing! It took this individual a very long time to recover, so she's been at the Treatment Center for a long time, and she was so pleased to be finally strong enough to leave. We were having a whole celebration of her departure, but as she was walking out, one ambulance drove in, the second ambulance drove in, and a third ambulance drove in. So one moment you are in this high – 'We are going to have an empty Treatment Centre! We are winning this!' - to then see one, two, three more patients coming in with confirmed Ebola. It felt like every time you had something that you could really celebrate, you just got kicked in the gut.

CAS: That must of been difficult.
Laura: Yes, but there were so many good times that always seemed a bit incongruent. And this is where I imagine the story would resonate with AIDS activists as I think of sort of almost bad humour that goes along with infectious diseases. Having worked in HIV/AIDS, there can be a bit of a dark humour, or play on words, and there is a lot of that that's reflected in Ebola crisis as well. You are working on a very hard life and death issue, but if we can't keep our sense of humour and our spirits up, then it can be hard to get through the day.

CAS: You already mentioned some of the similarities between the HIV and Ebola response. In your opinion, what role does stigma and discrimination play in the Ebola crisis?
Laura: It felt a bit like going back in time. Suddenly, you are hearing these fear-based statements, such as “keep them away from us” - all of these same statements that just took you back to the 80s. Have we learned nothing?

I was interviewed before I left by a lot of media outlets, and then I left, and never looked at the comments under the articles since I was busy fighting Ebola. When I came back, a friend of mine asked about one of the articles, and I looked it up, and there were comments – there was one comment in particular basically saying how dare I go and bring this infection back to Canada? And it's that same kind of stigma when I think of HIV. The people with HIV are stigmatized. The people trying to help them become a stigmatized population. All of the AIDS Service Organizations became stigmatized community organizations, and it all stems from that ignorance. It became evident with Ebola – the more stigma was placed on the disease, the fewer and fewer volunteers and delegates were willing to go, because a lot of people were not willing to deal with that attitude.

I feel in a lot of ways my experience was so different, and I think a lot of it has to do with the fact that I've been working in HIV for about 11 years, and that stigma is just not allowed in my life. Over the years, anyone who had that attitude dwindled out of my life. When I said I would go, especially from HIV Edmonton, I just had full support. We work to try to work against the stigma. I think the people in my life were very supportive. I realized that when I was there, and from talking to others, my experience was actually the exception, it was not the rule. I think it resonates back with HIV 30 years ago, even 20 or ten years ago. We still feel it now – this tone of “aren't you worried?” There are obvious differences between the two infections - Ebola is substantially more infectious, and it's much easier to transmit than HIV. But it's that type of thing that if you knew what to do you could prevent contracting it. We do understand how it gets transmitted, and there are lots of ways to prevent it.

CAS: Tell me a bit about Ebola campaigns in Sierra Leone.
Laura: I think one of the interesting things that was happening in Sierra Leone was something they've learned from early HIV campaigns. Early AIDS campaigns certainly in different parts of the world were fear-based, showing a lot of death and dying, and I think they thought it would build sympathy, but instead it built stigma. I think what was interesting and different with this Ebola campaign was that they had posters of survivors looking healthy, looking well. One of the strongest messages in the campaign was of an Ebola survivor saying: “Ebola stopped with me. As soon as I had a symptom, I self-isolated, and I did not allow my family to care for me. We called the number and I ended up at the Ebola Treatment Centre.” It meant that this individual survived and didn't infect the rest of his family.

CAS: That sounds like an empowering message!
Laura: Yes! A lot of people working on those campaigns have seen what hasn't worked. You get further with positive messaging, than you do with fear-based or terrifying messages. A lot of the posters were quite graphic around Ebola. They had to be quite simple, and I appreciated that too – their willingness to be clear about how you contract Ebola. They had animated drawings of people having sex, and people vomiting. They were quite graphic, but they were clear. I think that's where a lot of things went a bit sideways with HIV. People were so worried about talking openly – especially about sex – that they spoke around the subject, and people never actually got a clear message as to how HIV was contracted.

CAS: This discussion has been so insightful! It sounds like there are so many parallels between HIV and Ebola. Canada is so fortunate to have fearless and dedicated individuals like you, who are willing to take the road less traveled and do such inspiring work! What was the main factor that influenced your decision to go to Sierra Leone?
Laura: Nobody who knows me asks why I went. But it becomes a public question. “Why did you go? Why would you do that?”

I work in an organization that I don’t think should have to be here. With everything we know, and everything we have, AIDS Service Organizations should be able to close their doors. The struggles people are facing living with HIV/AIDS just shouldn’t be there. I can’t go back in time, to that beginning of the HIV epidemic, and do something different. I think a lot of that is driven from the fact that if we can manage this right away, then it doesn’t have to cost lives. It just doesn’t have to look like this – like HIV. I don’t want there to be Ebola organizations 30 years down the line. For me, I think, the fact that I worked in HIV drove so much of my decision to go. You see people dying, and they need help, and that’s I’m sure how people were feeling when they lived through the early AIDS epidemic. These people are dying – and it is not okay. I made the decision to go knowing that I would be going where other people would want to leave. You don’t want people in need to think they are alone – that they are forgotten. 'No' was never an option.

I had people telling me what I did was heroic, and it makes me so uncomfortable, because I worked with people who risked so much more. I think of the grave diggers, and the infection control team, who have been doing absolutely heroic work. But they will probably be ostracized and not be employable when they finish this epidemic based on the work that they did for the Red Cross. People who haven’t seen their families in four to five months, because they left their communities to come and work at the Ebola Treatment Centre. They gave up so much more then I did. I only gave a month of my time. I understand that we all risked our lives potentially – that was a real risk – but to me they are the real heroes of the Ebola response. They are living that reality every day. We lost a Red Cross staff nurse who died early on in my deployment, and everyone was in tears, but we didn’t lose any of our staff – they still came back to do the work. That’s heroic.

CAS: Thank you for taking the time to share your experience with us!

Laura: Of course, and thank you!

Posted by Canadian AIDS Society at 10:35 AM